(DISCLAIMER: So I have written this post about 3 separate times. First it was disjointed, so I scrapped it, and then it was about 4500 words. So I started once more… So bear with me. )

Sound is one of the most criminally underappreciated elements of game design. Sound design, game music, musical scores, sound effects, and voices all of these pieces make up the whole that is a cohesive game experience. When one of these elements lacks polish or is simply nonexistent a game can flop.

Voice over is one of the oldest parts of sound and game design. Before 3D graphics were considered in games, people were stepping up to the mic and giving speech and form to the in game characters and experiences.

Voice over is critically important to numerous aspects of any game. When it fails everyone seems to have an opinion on it; when it is delivered perfectly, most people overlook it.  When a player is immersed in a game, chances are that they do not realize what exactly is creating the experience, for to realize the ways in which they are being drawn in would render the effect useless. When players can’t find themselves enjoying or being enthralled by a game, they will begin to catalogue every issue they notice with the game. Voice over is usually pretty high on that list of problems. Voice over is categorically overlooked except when it fails.

As mentioned in a previous post (Why Skyrim isn’t Racist Enough) I explained the ways in which a voice can provide for subconscious character development by drawing upon user’s understanding of existing cultural identities. Take a look if you are interested how VO impacts in character design.

There is a way of producing Voice-over, but before you can address the quality of VO you must understand how voice over is created. It must be clear how an idea on a page can transform into thousands of lines of polished dialogue.

Ideation is the process through which the designers/developers create and brainstorm the project. They will develop the setting, mood, atmosphere, theme, and game play. When they have outlined the basic information and they have sketched out a story, the process can continue.

During the second step, developers will begin to create characters for the story. They give the characters names, faces, imperfections, personalities and backgrounds. All of the information cultivated by the designers and writers is broken down into character sketches, approximately 1-2 page summaries. This is used as a template for the production team in casting decisions. I’ll elaborate later.

*After Step 2, this is where production begins in earnest. At this point responsibilities shift hands. Step 1 and Step 2 usually fall squarely on the shoulders of a smaller group of writers and designers. There are a few different ways voice over can be done: 1) in-house 2) on contract or 3) a mixture of both. Each method has its benefits and drawbacks, but I won’t get too heavily into detail on that.*

Research is a combination of a few different processes. Primarily, this is the stage where the casting crew will pore over the character sketches and try to understand the characters as best as possible; the process ensures that they can make the best casting decision. Most AAA games call for at least 1 celebrity appearance to raise the profile of the game and bring strong talent to the project. The rest of the roles will fall to other non-‘A List’ actors.

Casting can be conducted in many different ways. There are 3 general types that can describe casting practices.

Scale – Think of scale as minimum wage for voice actors. Scale is established by AFTRA (an actor’s union), and starts at ~$800 a day. One day of performance (a ‘day’ is a 4-hour session) will earn the actor just under a grand. Depending on the reputation of the actor, they may be paid overscale, which is simply more than scale. Usually overscale is paid in increments of scale. So a C-List actor or a big name VO actor will get Double Scale for a session. A 4-hour day will net them pay equivalent of two 4-hour days, ~$1600. On the surface, a $200/hr wage may seem excessive, but most actors will finish their recording in only 2 or 3 days of performance which means they receive only 2-3 scale payments.

*Clarification: Writing can happen at any point during the development cycle of a game. Some studios prefer to write at the start of the project, while others prefer to write dialogue well into the game production.

With the roles and story solidified the writing team (either the studio’s writers or the contracted writing team) will develop dialogue for the characters and weave a ‘screenplay’. The game script will determine not only what actors will say what but when and the manner the lines are to be delivered. Additionally, all games have ‘throw away dialogue’. This dialogue is something that takes place outside the scope of the story and with no player interaction. A prime example would be the Elder Scrolls series: in the game you will notice that as you pass NPCs within a certain distance they will spew a nebulous piece of dialogue at the character. The purpose of that speech is to deepen immersion for the player.

Tied in with writing is the organization of the script. Each line for each character must be organized into categories by actor and by role (*Note: some actors play more than one role in a given game). If the primary character has 2000 lines to read, those lines must be put into a single organization. During recording, the actor and staff can read a line; mark it done; and move on efficiently.

Writing is often done in-house and production is done on contract; as a result organization between companies can break down and cause undue delay. Uniform and efficient organization is critical for a timely production schedule.

Recording is what first comes to mind for most when they imagine voice over production. However, it is probably much different than most people assume. Recording is a small and intimate process. There are only 3 people necessary for a successful recording session.

Voice Over is a very strenuous on the voice actor. It involves a large amount of repetition, speaking in unnatural accents, straining of the voice (to either create abnormal sounds or loud vocalizations called ‘efforts’), and it is fast (relentlessly so). This type of activity can be both physically and mentally exhausting for actors. Many screen actors who are new to voice acting will soon find they struggle to keep pace. Newer actors with little experience find that delivering lines with little preparation is difficult, that may mean a recast will be necessary for certain actors if they can’t keep up. 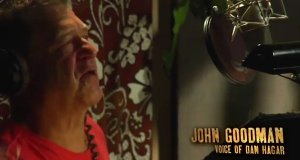 If some lines don’t get recorded before the session ends, or if an editor can’t salvage any of the takes, the actor will be called in for pickups. Pickups are simply when the actor returns for another session to record the lines that weren’t completed.

Voice Over editing is a two part process. First, during the recording session the director will denote which of the recorded takes was best delivered. Second, it is the responsibility of the editor to examine the indicated take and cut it accordingly. When a line is recorded, all the takes are recorded to one audio file, the good take is surrounded by bad takes and aimless talking. The editor needs to cut the good take cleanly from that file and polish it up. ‘Polish’ is adding any number of voodoo type post production magics to the line: cleaning up audio artifacts, removing excess noise, and cutting out sounds unintentionally made by the actor. If in the good take the actor stumbled on a single word, the editor may take the problem word from a different take and overwrite the mistake in the good take, creating what is known as a ‘Frankenstein’. These edits will be the final production quality version of the line with background noise and voice problems cleared out.

Some producers choose to perform Quality Assurance on the dialogue before it gets sent off for good. During QA, production employees will comb over every line that has been edited to check for: consistency with the script (Does the actor say what they are supposed to say?), audio clarity (Are there distracting background noises or artifacts that the editor missed?), and accuracy of labeling (Is the line labeled and named properly? If not the developers will add the line based on its label and the wrong character will spit out the wrong line). If they find errors they mark them to be sent back the editor. If the mistake is bad enough, a re-record will be needed and the line will get sent back to the director for inclusion in the pickups (*See Above: 7-Recording).

So now that the lines have been recorded, cut, and checked: they are ready to be added into the game. Lines still in the hands of the production team need to be delivered to the development team in order for final implementation. Both teams will have to designate uniform method of delivery so that the developers can anticipate when the lines will be delivered, how many there will be, and what lines are in each delivery. This usually means delivering in bulk organized by: recording day, character, actor, and scene.

The developer receives the polished lines that have been delivered and inserts them into the game. The developers are responsible for taking the deliveries and decomposing them and then taking the parts and placing them properly throughout the game. This step shows how critical it is for reliable Editing and QA. If a line is cut or labeled improperly, the developers may not catch the mistake, and the may player will hear a character speak someone else’s line.

So that’s Voice Over production in the tightest nut shell I could squeeze it into. I have attached the original full (and relatively unedited) 4500 word post. It goes into much more detail about why certain processes are important or the problems that can arise in each step. If you are interested I ask you to download it and take a look.

As always, comment if you have thoughts, praise, criticism, or objections.

I would ask that you keep in mind this post is based off of my personal experience, and I fully understand the each game publisher and developer goes about VO a different way.

Coming Soon (I have to clean it up a bit).